I was honoured to be included in the ground breaking  new and radical nature writing exhibition, Radical Landscapes at Plough Arts, Torrington. A small feature here at The Learned Pig:

“…if we desire to discover what was the distinguishing motive of the long-headed Neolithic man, we shall find it in his respect for the dead; and he has stamped his mark everywhere he has been by the stupendous tombs he has erected, at vast labour out of unwrought stones..”

From “A Book of Dartmoor”, by Sabine Baring-Gould, Methuen 1900

Over the last few years, my increasing interaction with ancient and archaic stones, structures and stone objects, led me to ponder whether my long term general interest in the mythology and folklore attached to stone, and its place in human experience might be explored through the prism of a putative “Lithic Memory”.

In setting out to research selected written and anecdotal records relating to our intimate relationship with stone, it became increasingly obvious that the magical, religious and folkloric power of stone is inextricably linked to the presence of the observer, and subsequently to the human perceptual mechanism.  This centres around interesting questions arising from human perception of subtle energies believed to reside within stone,  and the role of stone in the core functions of many ancient (and modern) societies which appear to depend upon such perceptions.

It would not be beyond the realms of scientific reason to recognise that stone, at varying levels of complexity, possesses electronic properties, which may or may not give it the ability to store information, and therefore possess a form of “lithic memory.” Further research into the energetic properties of stone, and it’s ability to “record”;  to literally store echoes of past events, and subsequently to act as a locus for expressions of sanctity, began to accumulate as a murky synthesis of solid state physics, mythology, and psychology.

For me, there is a continuous, ongoing inner questioning of the nature of our relationship with stone situated around arcane or archaic monoliths, walls, objects and monuments, and how this “lithic memory” might potentially be decoded and interpreted.

Perhaps the reason that I’m drawn to the lost, forgotten, neglected, ignored and abandoned, [apart from a certain dark, melancholic aesthetic conjured from memory and loss], is that these places act powerfully on the imagination. I see the capturing of images, and coalescent sense impressions as acts of retrieval. My written work is most often a futile attempt at reconstructing a half-imagined past, breathing life into that which is inert, giving voice to that which maintains enigmatic silence, re-enchanting that which has fallen by the wayside, obscured,  and mundane. Yet there is no sure way of determining whether noumenal voices from the outside are penetrating my internal solitude, or whether an inner silence is feeling for the hidden life of the outside world.

Having visited many ancient, sacred or significant sites, it is interesting to note that for many people, initial contact with such places is tactile. There is something innate that compels us to touch stones, to feel a vibration, a revenant perhaps, or simply to tangibly connect with that which has passed through the centuries?  One has to reside in a place for an extended period of time,  fully immersed, making frequent, and sustained contact before it starts to unfold.  It requires attuning and calibrating the senses, allowing images and sense-impressions to accrete.   This is not hard science, and makes no claims at scientific rigour. For me, this is a form of divination, dowsing, something approaching the poetic and impressionistic, listening to the voices within, and trusting the intuitive, the instinctual, and allowing it to flow and permeate the work.

Yet surely, this is not unique? Not exclusively my domain? Haven’t stones been the vector, the conduit through which our imagination flows for millennia? Doesn’t stone, possessed of longevity, endurance, durability, bear all of the outflowings of our creative imagination? Aside from pure utility, as waymarker, grave marker, the ceremonial, the monumental, the sacred;  stone has also been the canvas upon which the first and last humans will scratch, daub, etch, chisel, and imprint their potent imaginings, preserved in perpetuity.

People talk of  the mysticism of “ancient stones” and their associated power, but surely all stone, by it’s very nature, is ancient? Are the stones that line the mountains and valleys not as mysterious, as powerful as those hewn and set down by ancient man?  Is a “new” building not merely constructed from “newly formed” compounds,  amalgams of ancient clays and stone material ?  Perhaps the frequent, ritualised interaction of man and stone imbues the stone with some other, hitherto indescribable energy – a subtle transfer, the essence of the genius loci, the root of sanctity? Perhaps sustained engagement with ancient places, combined with an open mind, and fine tuning of the senses, might facilitate the unlocking of such accumulated energies, that we might literally connect with the voices from the past? 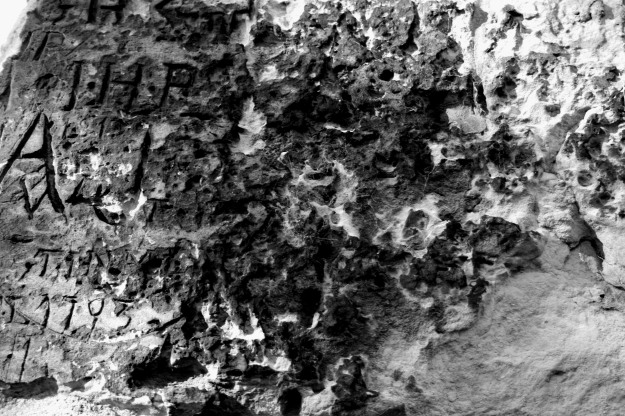